I've changed the name of the layout as you can see above.  In the car I learned that Paul actually worked for a steel mill here in Utah called Geneva Steel in Vineyard, UT.  So we'll call it that and start researching.

My generous friend Randy is a steel modeler (though I didn't know it until Saturday) and loaned me a $1,000 worth of steel books to read.  He'll be a great source of information.  Alan offered some too, but since Randy had the stack waiting for me at the Train Shoppe I took 'em and ran.  The stack included Freytag's Steel book and Bernard Kempinski's Steel Modeling book as well as others.  Lots of good reading.

As I do with most projects I try to study the prototype and most often model from a prototype.  My Savannah Central Railway is probably the only freelance railroad that I've ever built, but even it is based on several key Southern railroads.

Wikipedia is a great first stop!  While you can't believe everything you read on Wiki, it generally has good, basic foundational knowledge of your topic. 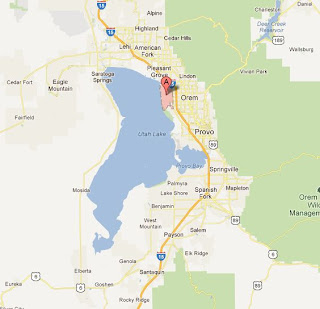 The mill is located just south of me in the Orem, Utah area, which means that I can sneak down there for photos.  I think it is VERY beneficial to model something close by so that you can reference it.

Key Information about the Mill (per Wiki):

The plant was an integrated steel mill. An integrated steel mill has all the functions for primary steel production:
Raw materials were shipped here by rail, processed into steel and steel products, and then reshipped by rail to their final market. The plant, in addition to having all of the facilities for primary steel making, included on-site conversion of coal into coke, plus other facilities for post processing of coal byproducts, including production of inorganic fertilizers. Blast furnaces converted raw iron ores into pig iron, and final conversion into steel was via open hearth furnaces. Rolling mill facilities for forming steel into plate, pipe, and some structural shapes were also located here. 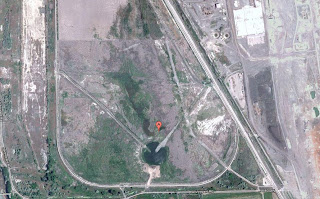 The current satellite photography shows the mill has been razed.  Nothing is left at all it seems.

The mill would have had a blast furnace, open hearth furnaces, rolling mills for pipe and structural shapes.  The plant operated until 2002 so we probably want to model the more current version of the mill so we can use more modern locomotives and track.

Here is a video of the destruction of some of the plant!
http://www.youtube.com/watch?v=u1uNjLJU-oc 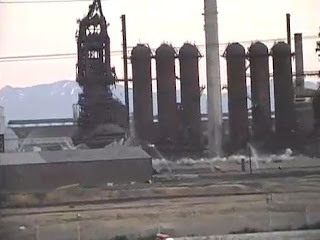 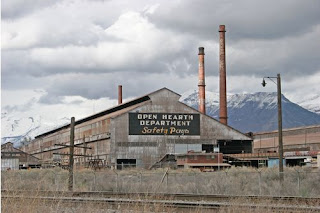 So I would think this shot would indicate that we'd need to include the building with the sign.  Note the wonderful Wasatch mountains in the background that make our home here so beautiful! 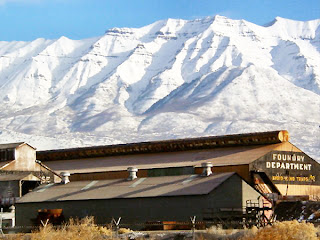 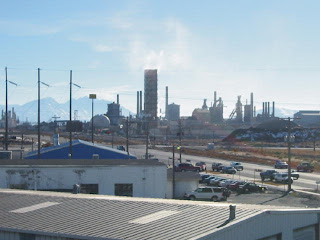 The mill in 2001.  Just before going bankrupt after a government bailout.

Shot of the mill...don't know what the "sanding tower" device is. 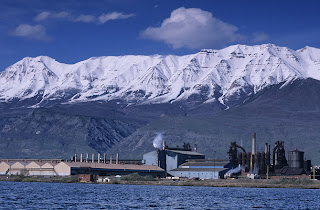 This has to be the prettiest steel mill ever!  Geneva Steel in front, Mt. Timpanogos in the background, and Lake Utah in the front.  This is NOT the Great Salt Lake, but a large freshwater lake south of Salt Lake City. 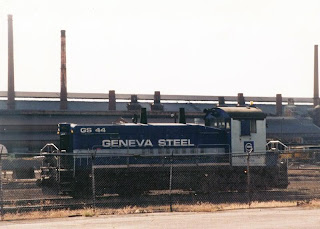 You just HAVE to have one of these snazzy looking locos on the layout!  Can someone identify this make/model for me?


A note from Ironman:


The plasma cupola grew out of an idea developed by the Westinghouse Electric Corporation, the Electric Power Institute, the Modern Equipment Company and General Motors in 1983. The project was to develop a plasma cupola that would allow the melting of lower cost scrap, reduce coke consumption, increase productivity and improve process flexibility.Geneva's coke ovens were wearing out, and the plan was to melt cheap iron scrap in the cupola when scrap prices were low, and operate the blast furnace when they were high. In both cases the molten iron would be fed into the BOP. In this way Geneva could shut down most of their aging coke ovens and be more flexible during changing economic times. The plasma cupola was designed to produce 50 tons of molten iron per hour when charged with up to 70% of cast iron boring's or scrap. Unlike the General Motors experiment, theGeneva experiment did not produce enough iron to economically feed the hungry Q-BOPs like the blast furnace.USS did not leave their Geneva successors a lot of modern equipment. They had to replace the old open hearths with Q-BOPs, there was no continuous caster, they had to add emissions equipment, and the coke ovens and rolling mills were aging. Their only hope was that they were the only primer plate producer on the west cost. And, with the fall of the plate market, this was not enough to keep them in business.

I searched out another 100 or photos and drawings for the steel mill.  Other sites I used were

When you search for images, look at the web page that you find for other links.  There are massive amounts of photos, documents and drawing available these days.  You don't have to have a book!


Wizdom:
1.  Modeling things that are close by give you the opportunity to research in depth, take your own photos and measurements and tap local "experts" for information.
2.  Knowing "why" someone wants to model something can help you design the layout more quickly.
3.  When searching for data be sure to look at other links on the websites you hit, and on Google Photos be sure to type in the search line differently several times as you'll get different things.