Thinking About the Georgia Northeastern

Now that I'm moving and thinking about a new house, I want to build a model railroad that is more permanent than some I've built before.  This time I'm not moving.  Anytime I start with a blank sheet of paper I always think about the Georgia Northeastern

Benjamin Matchett recorded this great railfan journey on the GNRR.  What fun!  Lots of good bell!

I'm thinking about building some sections (Layout Design Elements or LDE's) in my spare time, and highly detailing them.  Then add to a layout later.

Thomas Klimoski's article on modeling the Tate facilities is due in the mail soon.

My friend Rick Wade is a very talented modeler and fantastic clinician.  He sent me a link to his latest on line clinic for making quick yet effective scenery.

Operations Night In North Carolina on the Piedmont & Western RR!

Its been a long time since I posted.  A lot has gone on.  I had to sell my business in Salt Lake because I had been working non-stop for 2.5 years and was just exhausted.  It was doing well, but everything I hoped to gain from the benefits of owning my own factory never came to fruition.  So I took a new job doing what I love and moved to Fort Mill, South Carolina.  Big move, but I'm back in the South and near family and friends.


Last night my new friend Jim Thomas gave me the green light to join him at Jack Parker, MMR's fantastic Piedmont &Western Railroad.  I can't remember when I've had so much fun with a great group of people.  If you look up Southern Hospitality in Wikipedia...you will find Jack Parker's name in the first sentence.  He is a wonderful person and a top notch model railroader.  If nothing else he was most patient and kind with my first night operating mistakes.  Though I have to say the layout is done so well, I only made a few errors. 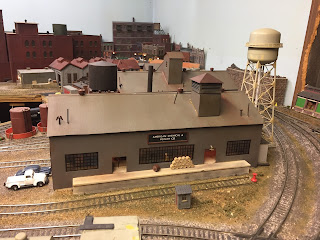 Being a lover of chemical factories, I loved this industry and spent a great deal of time looking at it. 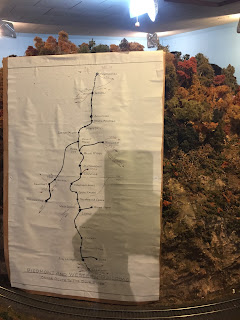 The road runs from North to South, from West Virginia down to Charlotte. 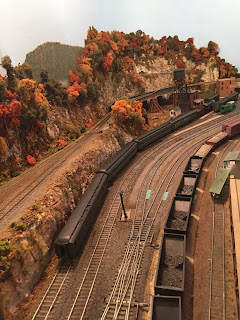 The fall scenery was certainly perfect for this time of year! 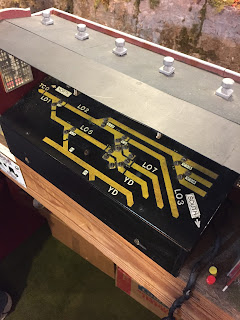 The control panels have a hot "lead" and to through a turnout you take the lead and touch the contact point.  SNAP!  Wow, this cuts down on wiring and switches! 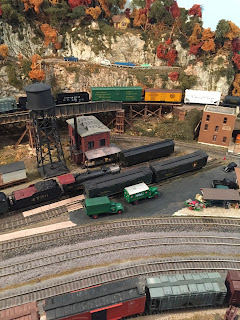 This railroad is built in TWO BUILDINGS!  Literally you have to leave one building to chase your train in the other building as it goes over the outside bridge.  It took me over an hour to traverse the main line on time, North to South. 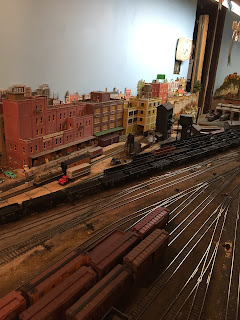 Most of the trains are pulled by articulated locomotives!  This was a first for me on operating night as usually you have diesels.  They ran great and pulled long trains over the mountains with ease. 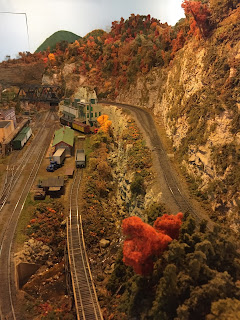 The main line is supposed to be 600 feet, but I really think it is much longer than that. 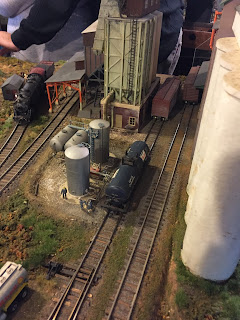 There are quite a few well detailed and constructed industries on the line, and lots of reasons to move coal. 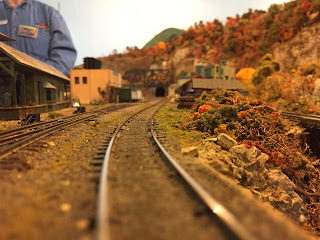 Marshallborough is where I took a rest on the siding waiting on another train to pass.  Having an articulated on the front end can sometimes make you a bit too long for the siding. 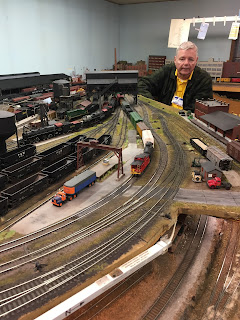 Jim Thomas, who agreed to let me come play with the trains, is also my neighbor!  After getting a chance to talk we found out that we are only about a mile apart in Fort Mill. Ride share!  Well, that and he's just a fantastic person. 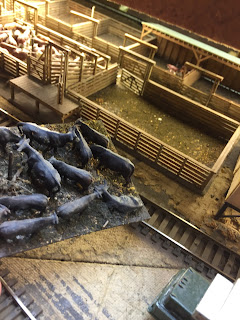 This is absolutely brilliant!  With as many livestock buildings I've built it never occurred to me to do this.  The cows are removable!  You unload the cows and put the plate of cows into the pen, then remove them after they become steaks.  So easy! 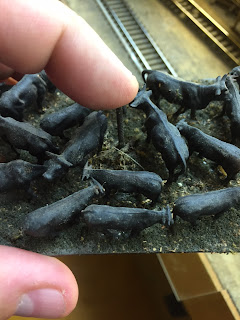 Jim showed me a small pin used to lift the plastic sheet up from the pen, removing the cattle. 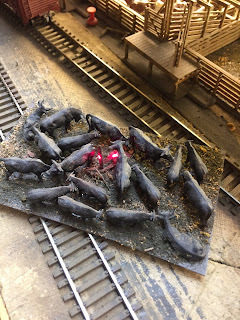 Its very hard to see, so Jim shot the laser pointer at it. 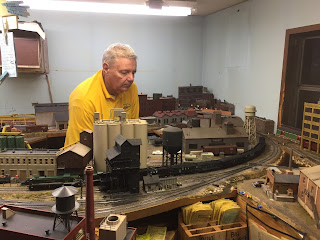 After running the main line as an Engineer, I worked the Mt. Laurel yard as the Assistant Yard Master in hopes of earning my stripes and one day getting to run one of the many active yards on the line.

Here is some short video of the line!

All in all it was a great day and I had a chance to make a lot of new friends!  Thanks Jack, Jim, John Y, John S, Fred on the panel, Dick from RR CirKits and all the rest.  I look forward to running with you again in January.
Posted by Scott G. Perry at 2:30 PM 1 comment: