The lighting man was supposed to come today and install my new 4 bulb 6,500 Kelvin light fixture today but apparently he hurt his back.  Guess I'll do it tomorrow or next week.  Kinda like that here in Utah.  When we get snow, everyone calls in sick.  It confuses me that they just don't say "hey Scott, the powder is good, see you next week."

Let's finish the room up so we can start doing some design work.  Not much left to do. 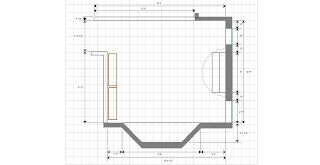 I made a new layer called FURNITURE and drew in two four foot bookcases.  This CAN be moved if needed, though I don't know where they will wind up.  We also want to draw in a safety zone for the fire place which is a three foot radius from the front/center of the fire.  I like the fireplace and want to use it.  Sometimes it does get cold in the winter and its nice to kick it on.  Safety first! 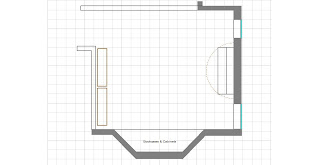 We'll turn off the DIMENSIONS ROOM layer as we won't need it much from now on.  We do need to start labeling things, though.  I'll create a TEXT ROOM layer for text that applies to the room only.  That way I can turn it off when we just want to see the layout text.  Having layers is a great idea and very handy.  Should you ever decide that you should have created a layer, but didn't, its not too late.  You can always start one and selection each item and change its layer.  My first text is for the bookcase and cabinets in 3" type. 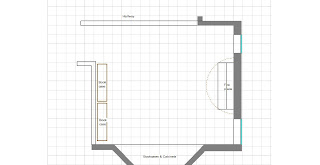 Next I label the bookcases and the fireplace.  Oh, let's label the hall behind the long wall.  While it is doubtful that I'll use it, it is accessible and is wide enough I can put a one foot deep layout section down its length. 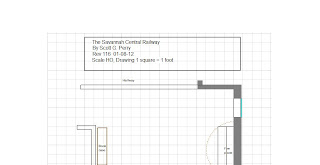 You need to label your drawing so that people know what they are looking at, so I make a new layer called HEADER and make a box.  Then I put in important information about the layout.  I keep all the text and lines in the layer so that I can turn it off when printing if needed. 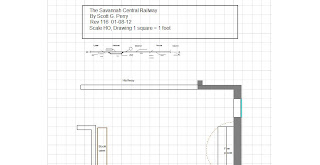 While it is not accurate yet for this layout, I did copy the string diagram from my old Dixie Central layout and give it its own layer called STRING DIAGRAM.  It's a good thumbnail sketch of the layout. 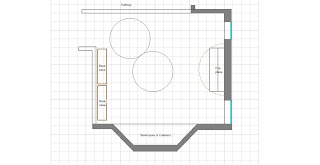