Sometimes it can take me weeks to get the mainline the way I want it.  What I haven't been showing you is the hundred thousand doodles that I've been making on the side.  Usually I design the layout with a track diagram FIRST, so I'm still doing everything a bit backwards.  However, the layout of the mainline is fairly limited given big trains, large curves and as much mainline track as you can get.  The trick of this layout is making not look roundy-round like a slot car track.  We're getting there. 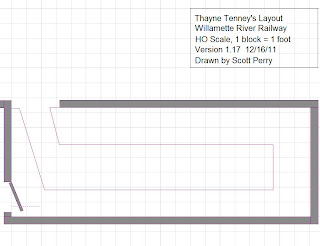 I've taken a break and went to a fun party last night, so I'm ready to start fresh.  I cleared a file and will begin with some similar loops. 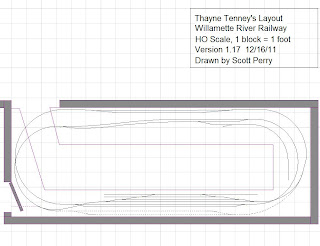 It is hard to tell the levels here, but the one toward the bottom of the screen is the higher level and the yards are lower levels.  My thought is to hide some staging track in the angled roof section of the layout that will just go to waste.  I don't like hiding staging track, but on a layout of this size we don't want to wast any space when you like big trains.  What I haven't showed you is that there is a large closet behind that little trap door on the left hand side.  It is big enough for a loop for turning trains.  On this one I've started playing with the Portland Terminal Railroad Company (PTRC) shortline trackage.  This Genesse and Wyoming Shortline will handle the harbor traffic. 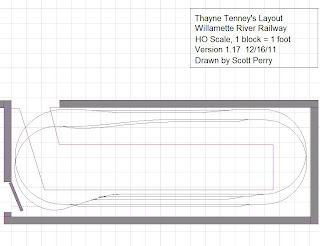 Oh !!@$!$^!!!  I hooked up the loops wrong.  The last drawing is just two loops that don't connect.  See? I've been up all day doing honey-doo lists and am pooped.  So I started with a clean sheet of CAD paper.  I made the Brooklyn Yard (one on the bottom) a bit smaller for now and am thinking that we might want to make a bulge in the benchwork here to add two tracks.  I've also put in a passing siding on the upper track to handle an industry that will show up later.  I'm starting to see this as a final mainline, but we'll keep tinkering with it.  This is the Brooklyn Subdivision on the Union Pacific, so I've recently found out. 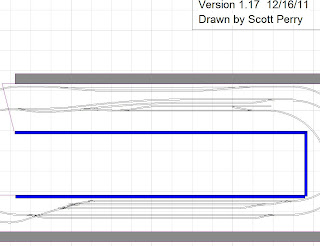 I took a hot bubble bath and feel a be rejuvenated.  Yeah, I'm in touch with my feminine side but frankly Bubbles and Bourbon go together.  While soaking in the tub I dug out three old track planning books and looked up layouts based on shoreline operations.  Let's work on the PTRC.  First thing you need is an interchange track, so we'll add a long siding for the UP to drop off and pick up cars.  I think the PTRC is really on the opposite side of the river and links to the Burlington Northern Sante Fe, but hey...it's Thayne's railroad and if he doesn't like that we can change it.   Once the interchange is in the PTRC needs a bit of yard trackage on its own.  We'll give it yard track with a long yard lead and a passing track with a switcher pocket. 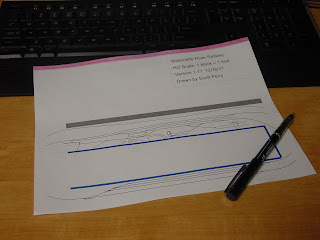 Here is where I go freehand again.  Designing port yard trackage is tough work.  The tracks must make sense or they don't look real.  Likewise they need to operate well or no one will play with you.  I'm just going to rough some stuff in but this is no where near what it will really look like.  Its more to give Thayne an idea of what is possible.  I sketch and sketch and sketch. 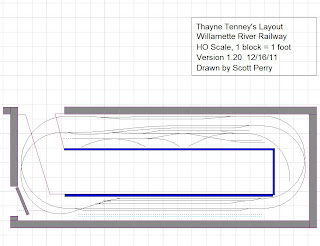 Enlarge this one and take a look at it.  I've put in some of the crazy port trackage that I've gathered photos of.  Take a look on Google Maps at Portland around the river area and look at the funky buildings, odd track, garbage, rust and other fun stuff.  It just HAS to be modeled!!!

Enough for tonight.  Have to work tomorrow.
Posted by Scott G. Perry at 9:22 PM