Willamette River Railway - Any Port in a Storm

Let's finish up the port now that we have some ideas. 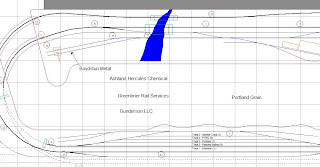 First I trimmed out a lot of the track to open it up for more scenery options and less switching headaches.  We'll still with just three or four industries.  I put out the names of the industries and will start plugging them in. 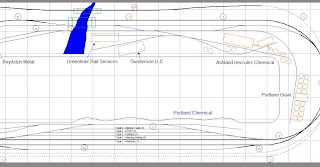 Ashland Chemical will be the fun one.  It can take a lot of varied traffic.  A much later addition of a spur requires some unusual trackwork (from a real Portland prototype) and the tanks and piping will add interest.
Greenbrier Rail Services will be isnide a building where they will repair and rebuild rolling stock.  This industry can take any type of car.  Gunderson LLC was there, but has been yanked. 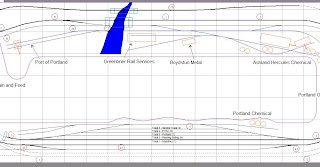 Boydsun Metal Works will get the prominent spot and a small dock along the river for chopping up metal.  It will move a lot of gondolas.  On the left I've put in a general port dock for loading and unloading that will reach out to the river.  Flats, gondolas, and intermodals along with flat steel can be loaded/unloaded here.  So far we have simplified the track and made industries from real businesses. 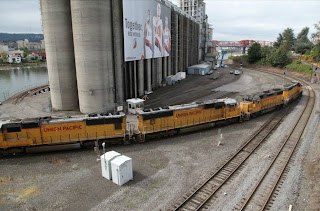 There are several elevators in the area.  This is one close to the yard.

Here is another very large one.  They never put the name on the mills in this area. 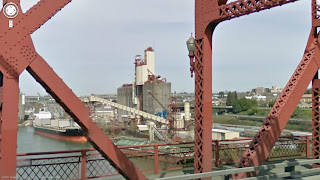 Even the view from the bridge didn't show a name.  We'll just name it for Portland. 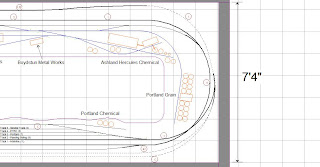 Portland Grain is a large consumer of grain, so we'll need a large producer.  We'll also add Portland Chemical which could be both import and export.  This industry is in front of the yard and actually exists, though I don't know its name. 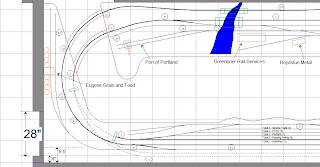 To make the industry seem like it is much further away we'll call it Eugene Grain & Feed.  They will receive (to make feed) and ship (corn) off line and to the Portland Grain Terminal. 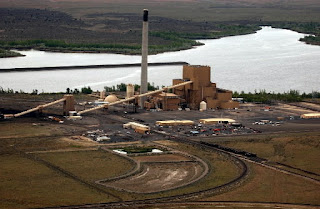 Thayne has almost completed the assembly of a coal fired power plant, and we want to incorporate it on the layout.  Oregon has one coal plant and that is the Boardman Plant for Portland General Electric. It will get its coal from Wyoming and will come from the staging tracks.  Getting track to the plant has been a problem, but I think I've got it fixed. 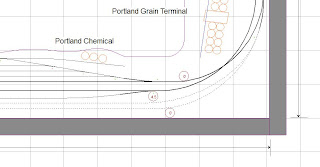 The only real way to access the back corner is from the Eugene yard.  Guess I need to name it, so I'll do that first.  It's Albina Yard, btw.  So we'll need to put in a turnout at Eugene to feed cars to the plant.  The plant is large and I don't have exact measurements, so we'll have to work this one out. 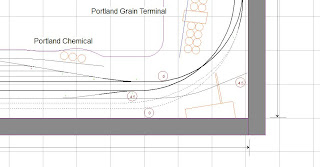 The siding is longer than I thought, but unloading the coal train will take two shifts, which will be fun.  There is plenty of siding and the whole grain train can fit in its siding.

Final Plan for Review - Click to Enlarge
There!  I look some time and went over the layout and added some things, move some things, and put in some bridges.  I think we have a layout.

Thayne...ball is in your court.  Does this work?  Any changes you want to make?