Well, it seems my friend Rick is not all mirth...in fact, he's girth.  Lots of girth.  He asked me to design a layout around his needs.  Turns out the needs are pizza and beer.

Actually he needs to use the layout as an office.  What better place to work?  We discussed possibly making the aisles a bit larger.  I didn't think it would cost him to much operationally or scenickly.  But let's give it a try. 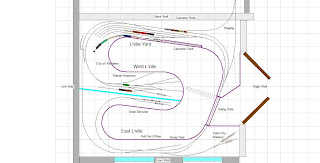 Here is the layout as it stands now.  The aisle are slightly over 2 feet, which is not bad for a small layout which will seldom see two or more operators.  But let's put it on a diet. 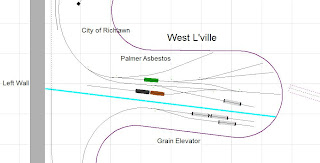 Let's work on East Louisville first.  The grain elevators can move to the open scenery spot on the Left Wall.  Let's move them, but keep some backdrop space for a warehouse facade. 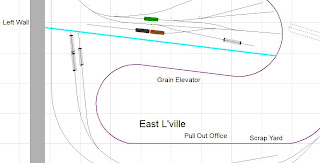 Hey!  With a curved turnout I even get more trackage!  Let's add a siding to the backdrop for warehouses. 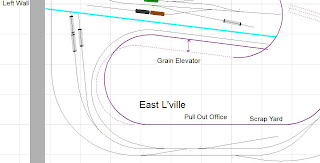 I've added a turnout near the siding and looped it around to the backdrop.  Plenty of room.  We've gained 5" making the aisle quite large, and we've added more operating potential.  We paid the price in open scenery. 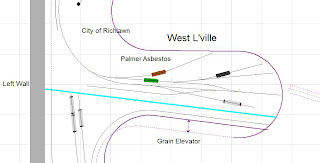 Let's swing over to West L'ville.  All we need to do is cut down the sidings on the top of the drawing.  Whack!  They are gone! 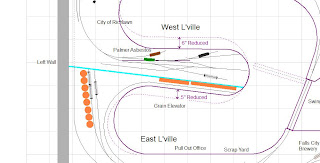 Six inches of reduction, and no tracks were really affected.  All we lost was some length.  I know...every guy hates that.  But the sidings are still there.  I drew in the warehouses and and a large grain elevator complex.

All in all we picked up 11" of aisle space, widened both aisles to roughly three feet.  More than enough for a chair and pull out for the laptop.