I'd like to thank my friend and Blog follower Bill Davis for finding a prototype for the idea of putting fake tin roofing material up for a valence!  The layout pictures below are taken on Bill's friend Doug Ramos's On3 layout.  Now this is one awesome layout!

The rust shades that he used on the metal are more like Colorado rust...mine will be more silver with rust streaks, common in the south.  But what a nice and unique look...and it really adds to Doug's mining operation feel.


Photos taken by Bill Davis. Click on photo to enlarge. 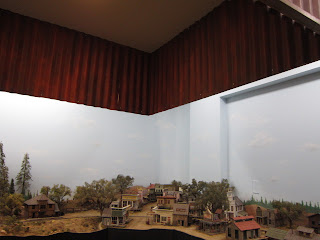 Model Railroaders are always good about using color around their layout fronts, but not so much with texture.  Normally you see a one color hard board valence.  Not only does Doug's valence add color and keep your eye focused, but it significantly adds "feel" to the layout.  When you walk in the room you KNOW this is a Colorado mining layout! 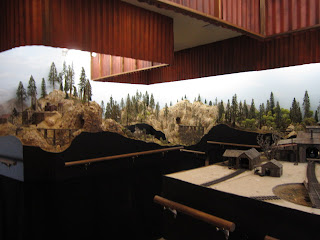 As the valence follows the benchwork line, the changes make it look like the roof line of a building.  He has framed it all around and heavily supported it, which I don't think I'll need to do. 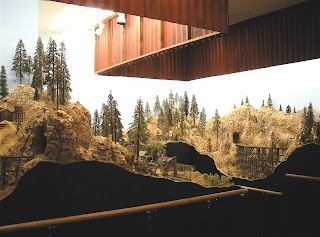 Here is a good shot of the back side with the supports. 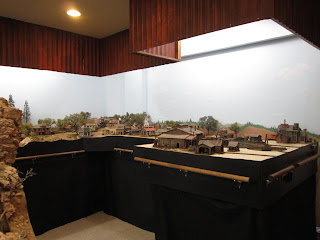 Now, down on the fascia he has hand grips mounted.  This is another great idea as it serves as a bumper post for hits to the layout, and it gives "sticky finger" visitors a place to put their hands.  Brilliant. 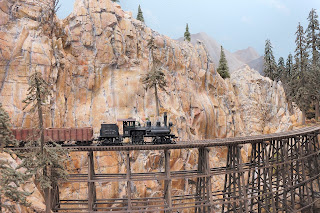 This layout is absolutely amazing!  Look at that rock and bridge work! 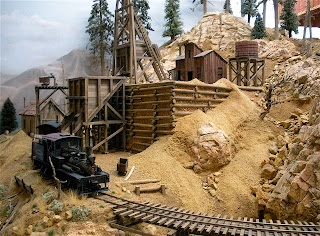 You can feel the dry, dusty mountain here as the dig out the ore.  Great model work, Doug Ramos!  Bill Davis, thanks so much for sharing!
Posted by Scott G. Perry at 5:14 PM