Super Thayne 13 The Viking came over to visit!  It was great to see him and I like working on the railroad with him.  It was very impromptu, but we got a lot done.  One thing I've learned is that construction goes much more quickly and correctly with two people.  Especially when you aren't exactly sure of what to do...which was the case here. 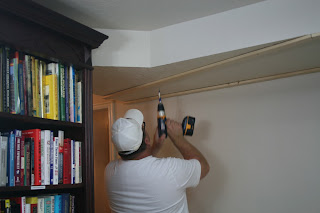 That's Thayne with the screw gun...and he doesn't like having his picture taken.  Unfortunately when you play trains with me you wind up in the blog.  Our first problem was mounting the wood frame.  The frame will hold the lights up and the valence as well.  This box is a sheetrock covering for a HVAC duct system.  There is a little wood on the edges so that is where we figured we'd screw the boards.  Thayne pointed out that if you screwed into the duct work...it would hold the screw, but the constant heating and cooling would cause the screw to back out and it will make the ductwork make banging noises.  Great points!  I never thought of that. 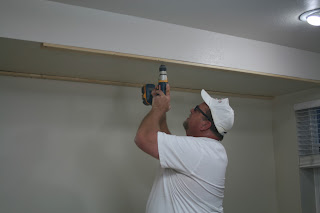 Together we put a frame of 1 x 3 pine up and around where the valence will go.  The chop saw makes quick and nice angles, so the work went quickly.  Two of us were needed to hold the long boards in place while they were being countersunk and screwed.  Yes, I did some of the work...so knock it off with the jokes.  Thayne is always glad to help and jumps right it....which is great! 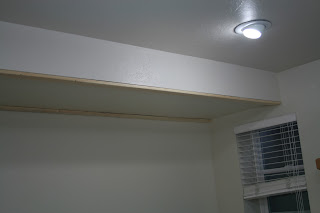 No board was needed at this end, just the front and the back.   All went nicely, but it did get hot quickly in the basement with both of us working, so we cracked the window.  Odd for this time of the year (November) in Utah, where I usually have two feet of snow in the window well.  The frame goes just to the edge.  On this I'll put another 1 x 3 board for mounting the fake corrugated metal sheets. 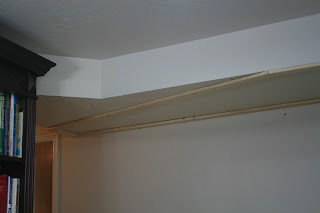 The layout tapers at one end. so we carefully installed the angled pieces to follow the benchwork line.  Perfect!  It would have taken me eight hours to do all this alone. 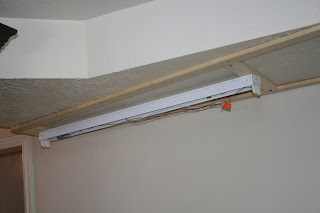 Next we cut two more boards and toenailed them into the frame.  These boards will hold up the light fixture.  The two bulb T-8 48" fixture doesn't weigh much, so this is more than sufficient.

Great!  One of four lights is now in place.  I won't begin the wiring until they are all done.  We did this on Sunday when I could cut wood.  It is hard to use the saw when the kids are going to bed early during the week, so not sure when we'll finish the other lights.  The rest of it will go quickly, I'm sure.