After a VERY bitter fight with the Superintendent I finally have approval for building the railroad.  Before we got married I made sure that we had an agreement that the basement belonged to Scott, and everything else house-wise belonged to the wife.  Like all wives, they HAVE to be greedy and feel like they should take everything from you.  Well, I wasn't going to let this happen.  Never let your wife have even the smallest part of the basement because it is just like giving small parts of France to Hitler.  They just want more.  So, after threats of divorce and making sure that I know that she resembles her mother...I have approval and funding for the Augusta Railway. 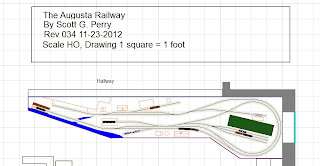 Here is the plan so far.  I've test run it on Third Plan It a few times and like it so far.  There are a couple of problems but nothing major, and it completes most of four of my AP requirements.

Essentially the operations are the same as the Dixie Central.  Its all about cotton in the late 1940's.  The boll weevil has hit, and post war demand for cotton is high.  This small railroad based loosely on Augusta, GA, is about a short line moving cotton around in the area.  The cotton exchange in Augusta was second only in importance and size to Memphis' exchange.  There is a large textile mill here, and the docks along the Augusta Canal.