Temple Square and its Main Street are about 10 1/2' long and no more than 1 foot wide.  It also requires a stand alone back drop.  Today we'll work out the construction details and build these two sections.

ALL ITEMS MUST BE CLEANLY REMOVABLE FROM THE BASEMENT.  Just in case we move to a new house in Draper, Utah.  I have to finish my MMR before I go insane.

The first thing I did was to make a new level called BENCH FRAMING and then select the 1x3 board lines.  I roughed in where I thought the boards would go.

I wanted to split the length into to approximately equal portions.  Luckily I hit it about right.  After plugging in the dimensions I made a slight modification and both sections are now 5'2" long.

I had drawn the benchwork to be more curvy, and it will be when I put on the fascia.  The track didn't line up with the joint very well, so I made some changes.  Essentially I lengthened the segment that spanned the joint to give me four inches on either side.  This isn't a module mind you, just a section joint that I may have to realign once if I move it.  I also shortened the mainline so that I didn't have to span the joint.  The butt plates on the sections will both be exactly 6.5" in length. 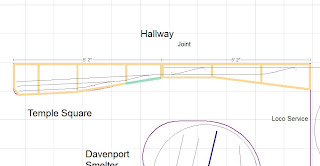 I've added in the key length dimensions, which we'll need for construction. 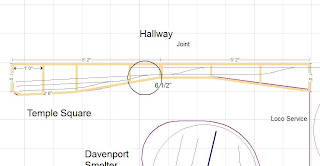 After switching on the AP PROGRAM level I changed this turnout to be the turnout I build for the AP Civil model.  This one I plan to yank out after evaluation so that there are only two tracks here and I can better model the stone dressing and construction site more thoroughly. 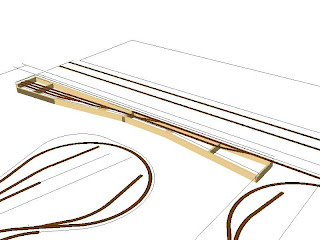 Here is what the sections look like in 3D.  Third Plan It does do some neat things!  I can probably build this in an hour or two, maybe tomorrow night.  It will bolt right into the wall without supports.  It will also be topped with plywood as this is an entirely flat scene. 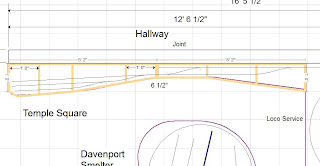 I'll print this copy out and carry it to the wood shop for construction.  I'll need to go get some plywood, too.

Ok, I know it is a stupid thing to keep track of your hobby costs because sooner or later the Boss upstairs will find out.  In my case she knows already as anytime I take out my debit card it sends an emergency notice to the Boss where ever she is in just a matter of seconds.  As the guys that were laughing at me at the train store the last time I bough something and my cellphone rang within seconds.

But I want people to know what I spend, what I'm buying and how much model trains cost.  They are NOT CHEAP and this isn't a poor man's hobby.  I figure this layout will cost $3,000 or more by completion even as small as it is.  And that is because I've got a lot of experience and tend to buy better than most.

So from time to time you see our cost tracker.

Wizdom:
1.  Design your layout so that you have some flexibility when you construct it.  Building the frames for the benchwork can require some changes to make assembly easier and that extra flexibility pays off.
2.  If you plan to build a turnout from scratch on your layout for the first time, make sure the turnout is NOT on a mainline and that it is of the same dimensions as a ready made turnout, so that you can remove and replace it should you not be able to get it to run smoothly.
3.  Never show your wife the receipts, and don't ever add up how much it costs.  I'm doing this just for curiosity and because I get so many questions about it.
Posted by Scott G. Perry at 5:27 PM