Do the Locomotion (Little Eva)

Welcome back!  I'm trying to get more done on the layout, so there are more frequent posts.  Taylor loves to work in the basement so it is a great motivator when I'm tired at night and don't feel like playing trains.

Tonight I'm tired of foam and just wanted to let the smoke out of some trains.  Taylor and I whipped out the DCC system and set up a test track.   She is new to DCC, so this should be fun. 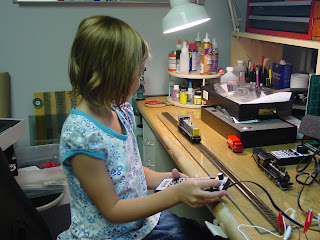 I've always used Digitrax because I lived in the Marietta, GA area where Digitrax was founded and everyone I knew used it.  So there were readily available parts, supplies, and repairmen in the area.  Would I choose it again?  Probably not.  I set up the system and after chasing down one little bug, it was working.  First on the track was a half finished diesel switcher that used to run on the Heart of Georgia layout.  Sound is working great.  I gave Taylor a throttle, gave her some quick instructions and she was a master.  Funny how kids these days are already pre-wired digital. 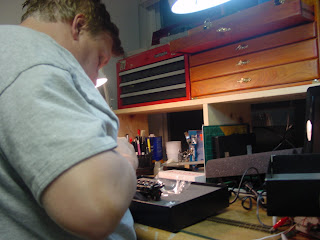 Next, we got out the 4-4-0 Southern locomotive that I had planned to use on the Dixie Central.  Come to find out that it did NOT have DCC or Sound like I thought.  Why the hell did I buy it?  I must have been crazy...or I have my engines mixed up.  Thought I had a sound unit loco for the layout.  Oh well, an excuse to go to the hobby shop. 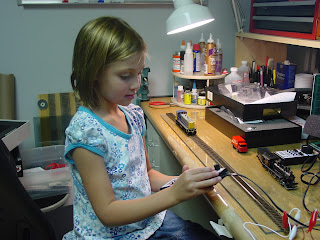 I put the diesel back on the track while I looked at the steam engine.  There is plenty of room for a sound and DCC system, so I'll go see my friend Randy at the Train Shoppe in Salt Lake City.  He will put one in for me.  Yes, I can do it myself, but I'd rather him ruin the chip instead of me!!! 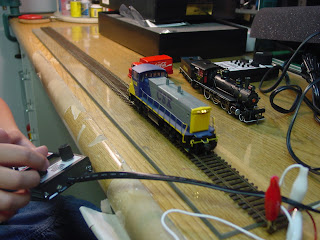 This little CSX diesel is running great, so I spend a minute teaching Taylor about horn signals. 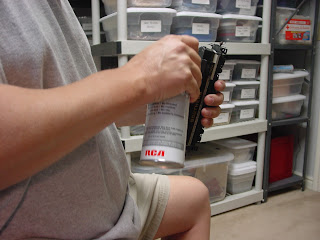 I grabbed another old Southern loco (a diesel) from the test track and blew the dust off of it.   We'll run it later. 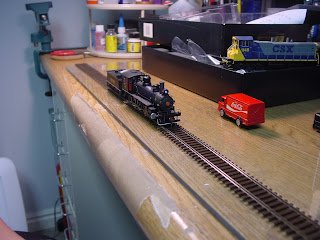 The Southern 4-4-0 goes on to the track, setting 0, and we run it back and forth, with a little motor noise.  Yes, this is a great loco for the small railroad, so we will put sound into it. 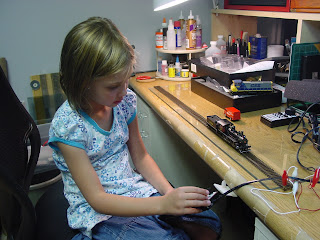 Taylor learns to start and stop the locomotive slowly...and never ran it off the track.  Good job! 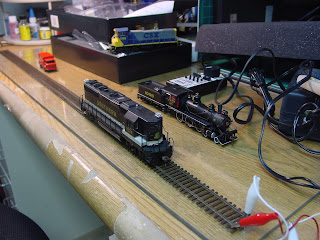 We end the evening with the old Southern test engine.  This was a $25 loco with a DCC system that I use to test trackage.  No loss if it goes off the edge.